History of the Gold Coast Seaway

Prior to the construction of the Gold Coast Seaway in 1986, the Nerang River entrance to the Pacific Ocean (locally known as the Southport Bar) had a history of instability.

Predominant southeasterly winds, the significant northern drift of sand and wave climate combined to move an estimated 500,000 cubic metres of sand along the south-east Queensland coast each year.

Over time the Nerang River mouth moved northward by up to 60 metres each year, causing land erosion and changing sandbanks at the bar and adjoining Broadwater.

In the early 1800s the Nerang River entered the Pacific Ocean where Jupiters Casino now ‘The Star Gold Coast Casino’ is now located. In 1930 the entrance was where Seaworld stands today.

It was estimated that by 2050, the entrance would be opposite Runaway Bay if no action was taken, and the township of Currigee on South Stradbroke Island would be in danger.

Sadly, it was too late for Moondarewa. Moondarewa was a coastal town established on Stradbroke Island. In 1984 it sat in the centre of the Southport Bar and was lost forever to the volatile Nerang River entrance. This is a clear indication of the obstacle that the untrained Bar presented to development of the Broadwater and adjacent land.

Check out the historical footage:

Construction of the Seaway

Research revealed that with the magnitude of the northward drift of sand along the coastline, any scheme to stabilise the entrance would require a commitment to artificially bypass sand across the river mouth in perpetuity. The Delft Hydraulics Laboratory of Holland, which had previously researched and reported on the beach erosion problems on the Gold Coast, again in 1976 presented a report to the Queensland Government which established a number of parameters which would be used in the final design of the scheme.

It was clear that the most economical approach would be to construct two breakwaters to form a new entrance through the Spit, just south of the existing entrance. Model studies at this time aided the design of these walls to ensure they would be capable of withstanding the cyclonic conditions that may be encountered.

It was also shown that orientation of the breakwaters to 15 degrees north of east and increasing the length of the southern wall would reduce the entry of ocean swells. Other model studies investigated the effects of wave penetration into the Broadwater. From this evolved the need to construct an island. Wave Break Island, to capture storm waves and protect the western foreshore of the Broadwater.

The number of methods were then evaluated to bypass sand across the entrance. As no comparable system existed elsewhere in the world, this task was not an easy one.

The system finally selected involved pumping sand trapped by the southern wall through a pipeline under the seaway to discharge onto the ocean beach of South Stradbroke Island.

Finally an exhaustive environmental study of the entire scheme was undertaken. With satisfactory answers to all questions, the Queensland Government, in 1983, decided that the Nerang River Entrance Stabilisation Scheme should proceed. The epic project cost $50 million and used one million tonnes of imported rock, two layers of 20 and 25 tonne concrete cubes (4,500 cubes in total) and dredged 4.5 million cubic metres of sand.The large-capacity fixed-sand bypassing system is an integral part of the design of the seaway and currently pumps 500,000 cubic metres of sand across the Seaway each year.

Today, the Gold Coast Seaway facilitates safe transit between the Broadwater and the ocean for recreational and commercial vessels. The sand bypassing system, ongoing dredging and construction of Wave Break Island have ensured that the entrance to the Broadwater was stabilised without detriment to surrounding beaches. The Gold Coast Seaway is an unqualified success proving that although nature can’t be tamed, she can be guided. 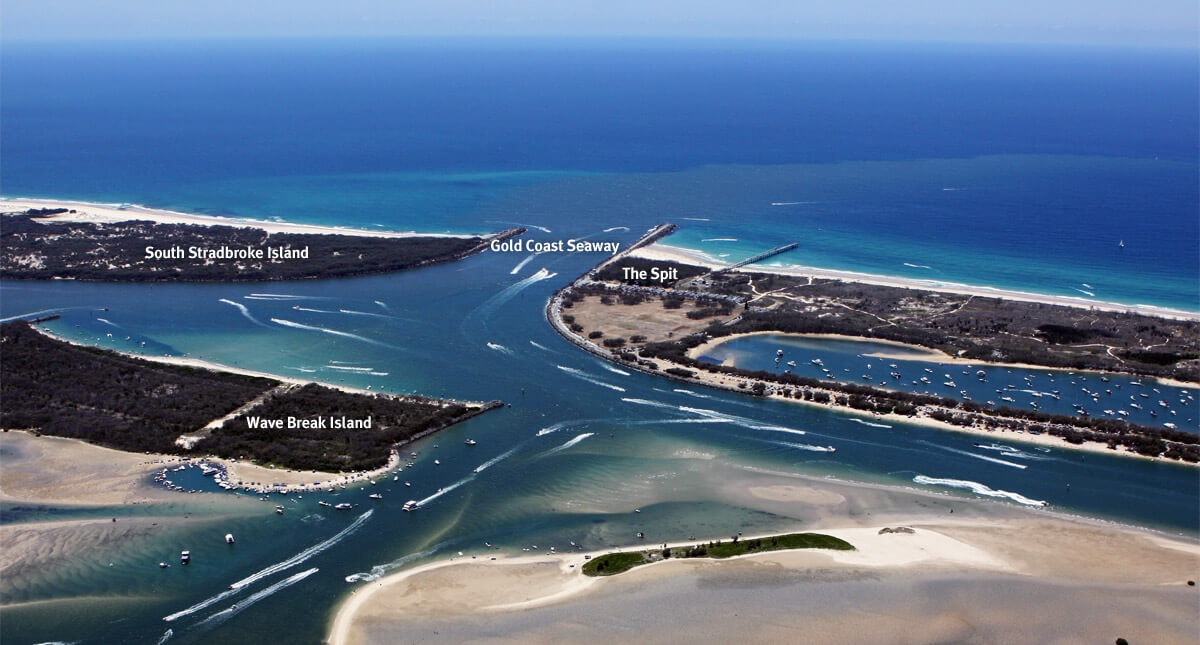